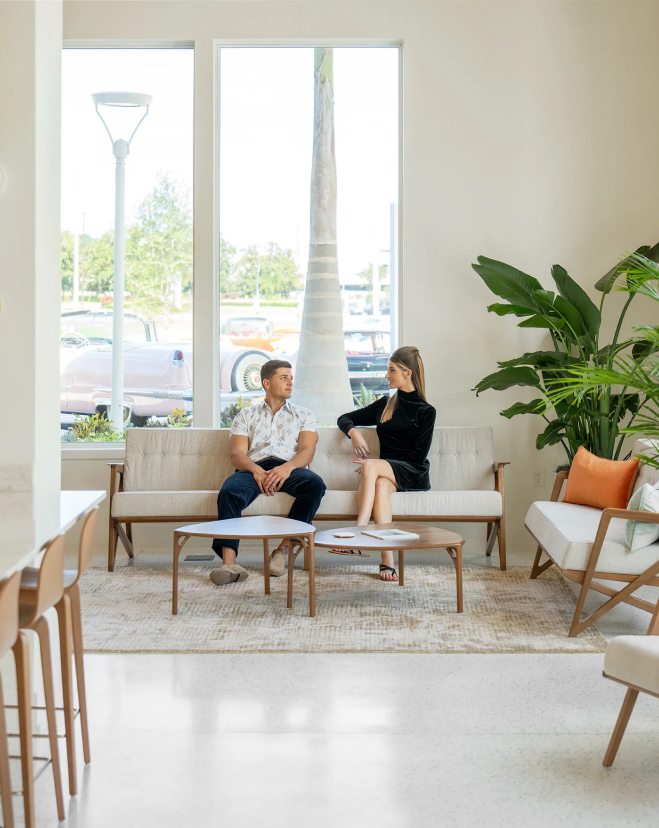 A multi-family apartment building in Florida breaks all the rules for what common areas should look when its architect-design team, who are husband and wife, take a holistic approach.

Iconic mid-century architect Gene Leedy provided major inspiration for Jessie Shell’s love of modern design. Her husband Fadi Garcia, a Cuban immigrant whose primary influence for becoming an architect was Havana’s modern movement, shares her ideals of the built environment. Together they’ve embraced holistic design, which is to connect architecture and design.

Their philosophy is to make architecture “of its place”: influenced by the building’s site, climate, and environment. At Sur Club that meant creating functional, comfortable gathering places in expansive, light-filled spaces. In true mid-century style, finding good synergy between the amenity spaces and the courtyard itself.

Working within the developer’s standard project budget, the team looked for timeless, beautiful furniture. “With all that light, we didn’t want to ground the floor too much,” Shell reflected. “That’s when we came across Sossego. One of the great things about the pieces is they are very light. And they offered a broad range of furniture to help create inviting spaces.”

The couple was also sold on the selection and authentic materials Sossego offered: real leather and warm Brazilian wood that contrasted with the space itself. A curvy Domingos Tortorà Frisos Disk that undulates with light. The ropes on the Giselle chair that mimic vertical design features the couple created. And the Ylla bench, with curves that suggest a canoe moving through water. “Our client was just blown away,” Shell recalls. “People come into the building just to look at the amenity spaces, and the apartments have filled up fast. We hope to keep raising the bar. Good design really sells.” 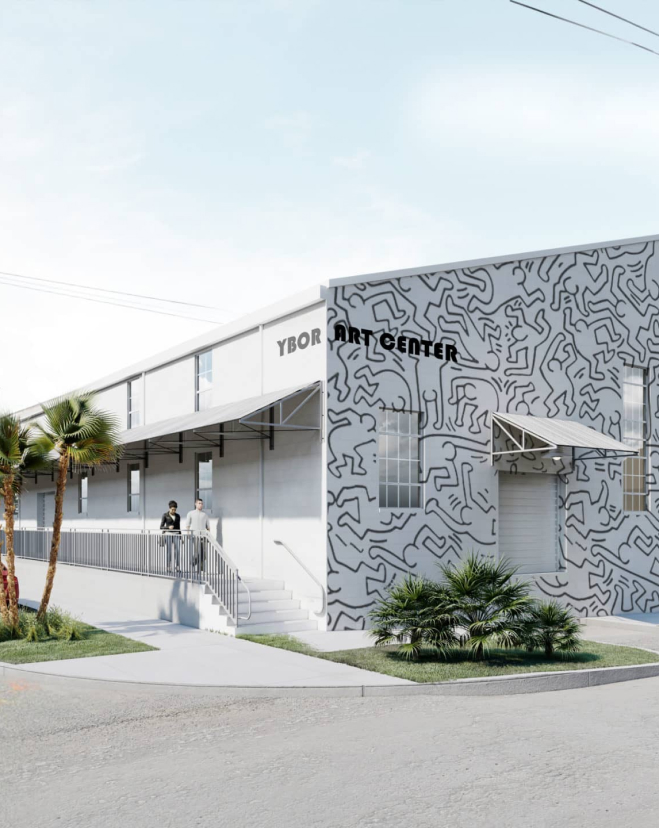 The vision of converting 12,000 square feet of warehouse space into galleries and art
studios is part of developer Darryl Shaw’s bolder vision for Ybor City.

“Ybor was a big arts district, but then the artists started to get priced out. We want to keep that culture, that flavor and really find a way to help artists return and live in Ybor,” Shaw said. “We are thinking about ways to do that. You have the Warehouse Arts District in St. Pete, but there’s nothing in Tampa.”

Shaw, who is the CEO of Tampa-based BluePearl Veterinary Partners, which he will soon retire from, is also leading the efforts of Gas Worx – a transformational project revitalizing 50 acres between historic Ybor and downtown’s Channel district into a thriving destination for residential and hi-rise commercial uses.

He explained how the reality for Meatyard, several blocks from Gas Worx, can only be achieved through multiple factors, including similarly replicating St. Pete’s success of flipping unused industrial steel buildings into vibrant artistic spaces, creating a destination.

Shaw has also studied Portland’s Northwest Marine Art Works, a collection of WWII buildings that now serve as studios for glassblowers and sculptors, and visited Sawyer Yards in Houston, Texas, a complex of artist studios, restaurants and shops inside warehouses surrounding a working railroad line. He also looked at Miami’s Bakehouse Art Complex, the city’s premier not-for-profit incubator for artists.

Shaw noted that studios can’t be enough to bolster the district, as there has to be an element of affordable housing so the artists can take residence in the city. Additionally, he believes educational institutions such as the University of Tampa, HCC and the University of South Florida can expand their art programs into Ybor.

“I don’t think this [Meatyard] is something that happens on its own. We have to be intentional about affordable housing for the artists and these institutions. If we get it all, it creates this critical mass,” he said.

The art studio component is moving ahead while the residential units are something Shaw and his team are looking at, to see how to make them affordable for artists to stay within the city.

In St. Petersburg, developers have toyed with the concept of micro-units, tiny homes and shipping containers to help address affordable housing needs for artists and others in the community.

“It creates this communicate, collaborative sector and that’s the goal. We are just starting the conversations on this,” Shaw said.

“We will need help to execute this. Historically, artists have left Tampa and have gone elsewhere like St. Pete and other cities. On the commercial aspect of art production, artists need an outlet to sell their art. As Tampa grows, we’ll see more interest geographically dispersed. I’d love to see galleries start moving to the area,” She said

No comments to show.